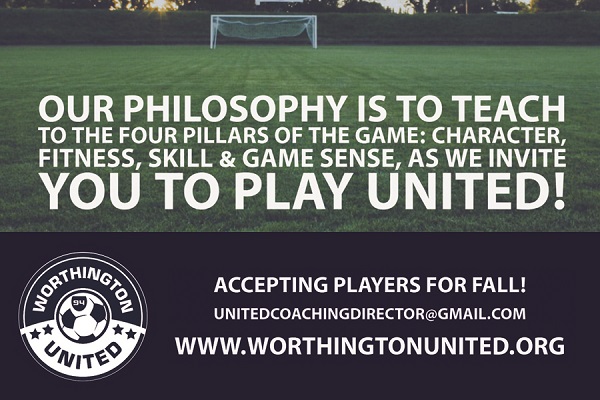 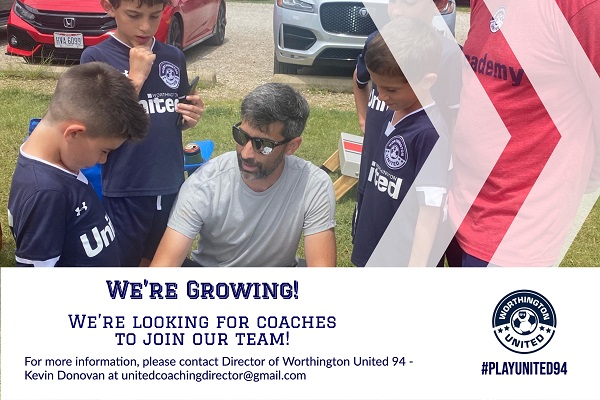 Worthington United 94 was formed in 1994 and is the select (club) soccer program for Worthington Youth Boosters, a 501(c)(3) non-profit organization located in Worthington, OH, a suburb of Columbus. Worthington United 94 is committed to providing the best quality training and programming at very reasonable prices, with a particular focus on individual player development and parent engagement.
The Worthington United 94 philosophy is to teach to the four pillars of the game: Technical, Tactical, Physical & Mental, or as they refer to them: Skill, Game Sense, Fitness & Character.
Did you know…
• United has close to 500 players in our competitive program, and nearly 30 paid coaching staff
• United has implemented a year-round player development curriculum based around the age-appropriate needs of the individual player
• United now has Varsity coaching staff from 6 different area high schools
• United has access to a practice only facility with 15 different practice zones, as well as Thomas Worthington & Worthington Kilbourne HS turf fields
• Though the majority of our families come from Worthington, we also have players from Dublin, Olentangy, Upper Arlington, Grandview, Delaware, Clintonville and Westerville
• United has partnered with Fit2Play to offer FREE movement training to all players in the club
United is committed to eliminating high costs and time associated with extensive travel. The goal is for players to find a love for the game while still having time to pursue life’s other interests. United is still accepting players for their Fall teams! If interested, please contact Director of Coaching, Kevin Donovan at unitedcoachingdirector@gmail.com.
www.WorthingtonUnited.org

Central Ohio Elite (COE) is a Select/Travel Soccer Club that fields teams for all talent l...

Greater Columbus Tennis Association (GCTA) is an official member of the United States Tennis As...

Register today for Nike Junior Golf Camps and get better this summer!Improve your game with some ...

Campers at every Nike Basketball Camp will develop all of their basketball skills – shooting, pas...

PRO Martial Arts is about far more than kicking, punching and karate workouts. From kids to adult...